skip to main | skip to sidebar

What is the definition of a bicycle?

I read
http://www.azleg.gov/FormatDocument.asp?inDoc=/legtext/49leg/1r/bills/hb2546p.htm
with interest, particularly, the section which proposes refinement of the definition of a bicycle:

Bike Friday and other similar travel bicycles typically have a 20" wheel, so I'm not sure exactly what the concern is.

Personally, I think that a rotary, human powered, propulsion mechanism is central to the definition of a bicycle. Pushing off with a foot, like with a skateboard, scooter or rollerblades doen't fit this definition but a racing wheelchair and a handcycle would. And if we are going to include trikes as part of bikes, why not quad-wheeled devices? 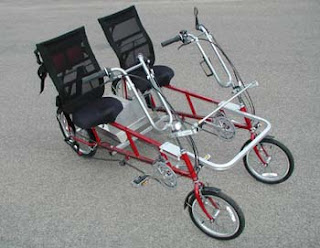 Based on the revised definition, I can fairly easily imagine contrivances which would technically fit the definition of a bicycle, but which I would think had no business being in traffic.
Posted by kneelt at 11:16 AM